The longing to become immortal has existed since time immemorial. Religious immortality narratives have always been created and believed in by many people. The decline of faith and religion now creates space for new, worldly immortality narratives.
The longing for something to emerge after our death is still there and wants to be filled. Digital immortality is a candidate that promises to fill this meaningless gap.
The dream of eternal life has been dreamed for a long time. Can artificial intelligence make it possible to unbound our limited lives?

Our work on ArtMine 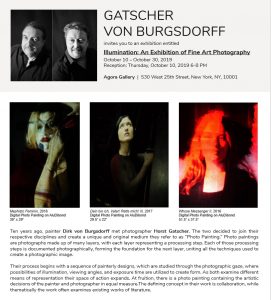 At the beginning of 2017 we started to deal with Faust. Our goal was to find out what Goethe’s idea and message was behind the work. Finally, we had to realize that it was exactly as Goethe said: “but it is not an idea that underlies the whole and each scene in particular. It should indeed have been a beautiful thing if I had wanted to put such a rich, colourful and highly diverse life, as I had seen it in the ‘Faust’, on the thin string of a single continuous idea.”

New aspects can be found again and again and one is more and more enthusiastic about the consistent composition of the work. Roughly speaking, Faust I is about striving and the urge for knowledge and perfection within oneself; Faust II is about Faust and Mephisto taking different positions in society. Since it was not our intention to illustrate Faust in retrospect, we took the step of working on the theme for Faust III. What would Goethe have taken up in a porting into the present time as a great theme of our time? Since the first two parts dealt with different aspects of development, this central idea is to be continued. Development today takes place to a large extent in the digital world. The actual development gives way to self-dramatization; it is not necessary to take up real positions, it is sufficient to stage oneself in them. The Faustian striving gives way to the meaningless striving for more. Accordingly, we stage ourselves in the action-bearing figures of Faust and place this at the centre of our work. This is how we ended up with an illustration – but an illustration that does not come from the superficial scene, but is inspired by the depth of the work. 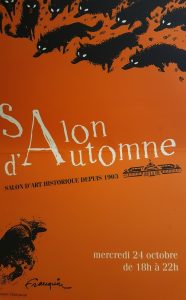 From 24.10 – 28.10 the big autumn exhibition took place in Paris in the Salon d’ Automne. We were there with a two meter version of “alles Vergängliche” from our Faust exhibition “Wir sind ein Teil des Teils”. The rush over the three public days plus the evening of the vernissage was gigantic. We would like to thank the jury and especially Mme Rose Sznajder for choosing us. In addition to the extensive supporting programme, a gala dinner took place in the middle of the exhibition on Saturday evening, organised by the Amis du Salon d’Automne. We are happy about the many interesting conversations we had with fellow artists and gallery owners and hope to be there again next year.

From 1.12.2018 to 13.01.2019 at the Schaezlerpalais and H2 – Zentrum für Gegenwartskunst im GlaspalastFrom 1.12.2018 to 13.01.2019, artists from Swabia show their works for the seventieth time at the Schaezlerpalais and already for the sixth time at the H2 – Zentrum für Gegenwartskunst im Glaspalast. The works of art will be integrated into the existing permanent exhibition. Pictures from the baroque collection have been suspended and replaced by the works of the exhibiting artists. This results in an interesting coexistence of old and new.